Did you know that the only trolley to transverse four states ran right through Great Barrington and Sheffield in the early 20th century?  On Friday, April 8, Gary Leveille will present “Streetcar to Sheffield — a Photographic History of the Berkshire Railway trolley” at 7:30 p.m. at Dewey Hall in Sheffield. 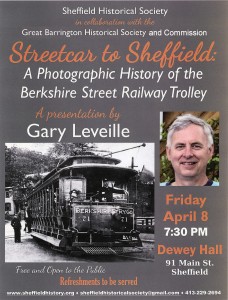 Sponsored by the Sheffield Historical Society, in collaboration with the Great Barrington Historical Society and Commission, the program will feature a PowerPoint presentation of rare trolley photos and the fascinating history of the Berkshire Street Railway trolley system. The Berkshire Street Railway began service to Sheffield in 1911 and ended there in 1919, but continued to Great Barrington until 1930. This program will be followed by an exhibit with the same title to be held at the Sheffield Historical Society’s Old Stone Store beginning on April 16, running through May 15.

The program is free and open to the public. Refreshments will be served.  There will be a reception in conjunction with the exhibit at the Old Stone Store on April 23, from 4 to 6 p.m., at which refreshments will also be served. Dewey Hall and the Old Stone Store are both located on the Village Green in Sheffield, on Route 7. For further information, the Sheffield Historical Society can be reached at (413) 229-2694