The premiere opening of GB Historical Society’s Greatest Generation exhibit at the Town Museum at the Wheeler Farmstead on Saturday, November 12 was a very big hit.  Crowds came to see World War II uniforms, newspapers, letters, medals, ration books, posters, equipment models, military gear, and lots of other memorabilia–as well as the chance to taste snacks and drinks from the 1940s.

The Society had asked community members to lend their WWII-era items for the two-month display, and was delighted to receive enough to fill two rooms. And . . . if you haven’t seen the exhibit yet, the you can view it every Saturday and Sunday from 10am to 2pm through Saturday, December 31, except for Christmas Day (Sunday, December 25). Admission is always free.

World War II vet Ray Elling points to items in the cabinet below his Navy uniform. Photo by Terry Cowgill, the Berkshire Record. 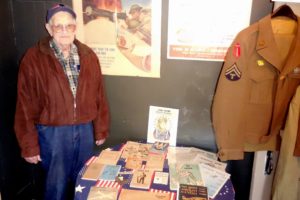 Local WWII vet Don Mouthrop, standing next to his war uniform and memorabilia. Photo by Terry Cowgill, The Berkshire Record.