This summer, reconstruction continued inside both the farmhouse and the Dutch Wagon House as well. The handicap accessible bathroom is now entirely finished, decorated with enlarged historical photos on the walls.

In the Dutch Wagon House, the rough electrical wiring was put in before and during insulation work on the walls.  insulation was painstakingly cut to size for each wall panel between the wooden beams. Those panels are unevenly sized due to the historic nature of the building. The first insulation layer is a vapor barrier foil, over which a second layer of foam insulation is installed.

The walls were painted by the Society’s executive director Bob Krol. Finished wiring is being done after the walls were finished. Two floor HVAC units have been installed, one at each end of the large room, as well as a “bonus” unit now in place under the window in the Museum’s front room.

The following photos will give you an idea of the reconstruction progress in the DWH.

Please click on each picture to see a full version. 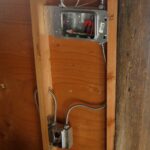 Rough wiring began before and continued during insulation work. 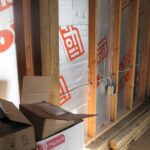 The bottom insulation layer is foil providing a vapor barrier. 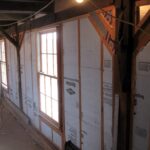 The second layer is foam insulation. 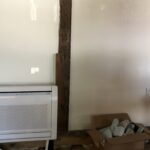 One of two new HVAC units installed after wall painting was completed. 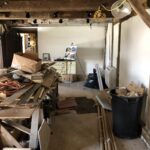 Latest view showing track lighting and spotlights put up as the area is being cleaned out..